Those of you following this blog early on may have noticed that I abandoned the Atari XEGS system as a platform for the Liber809 due to an issue that I was having with getting the system working in All-RAM mode.  My initial suspicion was that there was some subtle timing issue with the Liber809 board that caused it to fail in the XEGS.  Any write to $BXXX would cause what I *thought* was a write to $DXXX.

In actuality, writes to $BXXX were going to $FXXX and blowing away the bitmap font and display list that were setup there.  I confirmed this, then asked the folks on atariage.com for some assistance.  After looking at the schematic, it became apparent that either the two 4464 DRAMs or the FREDDIE chip were at fault.

I spent some time this evening desoldering and socketing the two 4464s, then replaced them with known working extras that I had.  After hooking everything up, the problem still persisted.  Any attempt to write to $BXXX was actually going to $FXXX.  That left the FREDDIE as the possible culprit.  All address lines go into that chip, and it's responsible for reading/writing/refreshing the DRAMs.  It seemed like the next logical step.

Since I don't have spare chips around, I turned to my trusty 130XE which had its FREDDIE soldered onto the board.  I carefully desoldered the chip and removed it gently, then inserted it into the already socketed FREDDIE location on the XEGS and started it up... SUCCESS!  The XEGS did not have any problems booting with the Liber809 ROM and 6809 processor.  NitrOS-9 came right up and I was able to interact just fine.

So it appears the FREDDIE that was in the XEGS was "sticking" A14 somehow.  Now to find a replacement FREDDIE.

On another note, my 130XE keyboard mylar was failing.  Keys were simply not working.  I found a supplier of replacement mylar keyboards, http://www.best-electronics-ca.com, and sent an email.  They were very prompt in responding, and I even picked up replacement key cups for both the 130E and XEGS keyboards, which eliminate the "spongy" feel.  I ordered on a Friday and the parts were here on Monday.  I then installed the keyboard mylar and key cups, and boy did it make a difference!  Check these guys out.  They are EXCELLENT Atari product suppliers!
Posted by j at 7:05 PM 4 comments:

Liber809 at the CoCoFest

This past weekend I attended the 21st Annual Chicago CoCoFest and brought over the Atari 130XE as well as a passel of assemble Liber809 boards.  Interest in the project was high even though attendance was obviously geared toward the Color Computer.

On Saturday afternoon I gave a presentation on the development of the board and the software.  There were good questions asked, and everyone seemed pleased.

Currently, we have plans to attend both VCF Southwest and the VCF Midwest this year.  Our hope is to have the Liber809 board expanded to other 8-bitters by that point.  Stay tuned.
Posted by j at 10:10 AM 4 comments:

Up and Ready for Sale

Today I updated the Cloud-9 website at www.cloud9tech.com to reflect the fact that the Liber809 is now shipping.

Several folks have asked what is required to really make use of the Liber809.  A SIO2PC device, which mates the Atari SIO port to a PC via a USB cable, is required to do any loading of applications into the Atari itself.  SIO2PC devices are available at various places on the Internet.
Posted by j at 12:35 PM 6 comments:

And Another One Down...

This evening I verified that the Atari 130XE works great with the Liber809 board (thanks to Mike Rowen for graciously donating the system to me for testing).  Since the latest incarnation of the Liber809 is so compact, I was able to put the Atari 130XE together, case, screws and all.  Makes it look all natural!

You can see how it looks, and even watch it boot NitrOS-9 from DriveWire on this YouTube video.
Posted by j at 7:54 PM No comments:

The last 5 days or so have been spent putting together the board and testing.  Three trace cuts and three added wires later, the board is coming up on the Atari 800XL here on the bench.  The trace cuts and wires were needed to work around omissions in the latest board run (our fault, not the PCB manufacturer's). 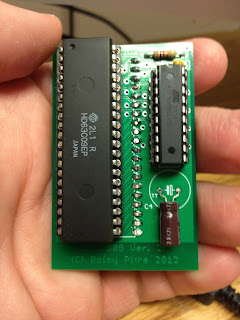 Because of this extra post assembly work, I've decided against selling kits and will instead sell entire boards already put together.  This allows some quality control and assures me that what I'm sending out actually works.

There's still an issue with the board working the Atari XEGS, so we're trying to pin down the proper equations to deal with the timing issues surrounding that system.  Once that's in place, the boards will start going out the door.
Posted by j at 6:30 AM No comments:

The boards arrived this morning via FedEx and they look great.  I'm still waiting on another order of parts to arrive before I begin to assemble and test the board.  That should happen early next week.  Assuming all goes well, we'll start making kits available shortly thereafter. 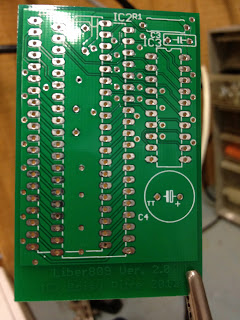 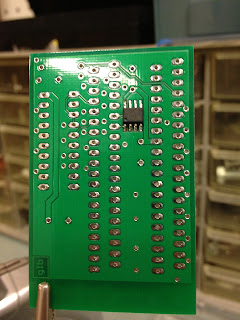 The absence of a post over the last couple of weeks shouldn't be an indication that nothing is going on.

On the contrary, things are on the move.  A few days ago, we sent final artwork over to the PCB manufacturer and should be getting boards next week.  Parts have been ordered and I will be assembling a number of boards.  The preferred method of selling the Liber809, however, will be in kit form.

The product will be sold through www.cloud9tech.com.  A final price hasn't been set yet, but that should be set soon.  In the mean time, anyone interested in one of these boards, either in kit or in assembled form, can email me to be put on the list.
Posted by j at 1:09 PM No comments: